A Strangeness in my Mind 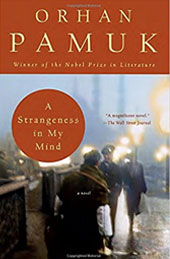 Arriving in Istanbul as a boy, Mevlut Karataş is enthralled by both the old city that is disappearing and the new one that is fast being built. He becomes a street vendor, like his father, hoping to strike it rich, but luck never seems to be on Mevlut’s side.

He spends three years writing love letters to a girl he has seen just once, only to elope by mistake with her sister. Although he grows to cherish his wife and the family they have together, Mevlut stumbles toward middle age as everyone around him seems to be reaping the benefits of a rapidly modernizing Turkey.

Told through the eyes of a diverse cast of characters, in A Strangeness in My Mind Nobel-prize-winning author Orhan Pamuk paints a brilliant tableau of life among the newcomers who have changed the face of Istanbul over the past fifty years.