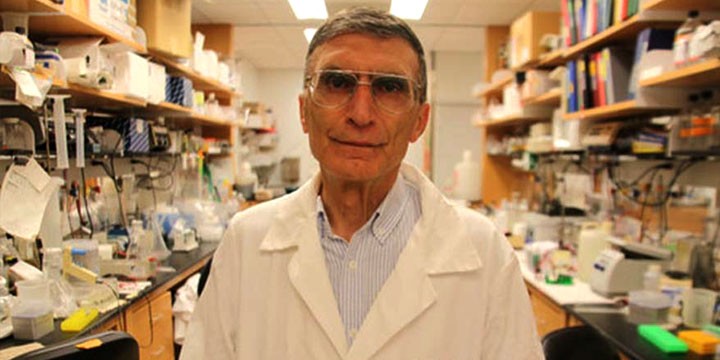 Aziz Sancar (born 8 September 1946) is a Turkish-American biochemist and molecular biologist specializing in DNA repair, cell cycle checkpoints, and circadian clock. In 2015, he was awarded the Nobel Prize in Chemistry along with Tomas Lindahl and Paul L. Modrich for their mechanistic studies of DNA repair. He has made contributions on photolyase and nucleotide excision repair in bacteria that have changed his field.

Sancar is currently the Sarah Graham Kenan Professor of Biochemistry and Biophysics at the University of North Carolina School of Medicine and a member of the UNC Lineberger Comprehensive Cancer Center. He is the co-founder of the Aziz & Gwen Sancar Foundation, which is a non-profit organization to promote Turkish culture and to support Turkish students in the United States.

Sancar received his primary education near his hometown of Savur. He then completed his MD degree in Istanbul University of Turkey and completed his PhD degree on the photoreactivating enzyme of E. coli in 1977 at the University of Texas at Dallas in the laboratory of Claud Stan Rupert, now Professor Emeritus.

Aziz Sancar is honorary member of the Turkish Academy of Sciences[16] and the American Academy of Arts and Sciences.

After graduating from Istanbul University, Sancar returned to Savur. Although he wanted to go to the United States, he was recommended to try out being a doctor and he worked as a doctor in the region for 1.5 years. He then won a scholarship from TÜBİTAK to pursue further education in biochemistry at Johns Hopkins University, but returned to Savur in 1973 as a doctor after spending 1.5 years there due to having social difficulties and inability to adapt to the American way of life. He only spoke French when he arrived in the US but learned English during his education at Johns Hopkins.

Soon after, he wrote to Rupert, who had been involved in the discovery of DNA repair and was at Johns Hopkins during Sancar's time there but had since moved to the University of Texas at Dallas. He was accepted and completed his PhD in molecular biology there. His interest had been stimulated by the recovery of bacteria, which had been exposed to deadly amounts of ultraviolet radiation, upon their illumination with blue light. In 1976, as part of his doctoral dissertation, he managed to replicate the gene for photolyase, an enzyme that repairs thymine dimers that result from ultraviolet damage.

Aziz Sancar was elected to the National Academy of Sciences in 2005 as the first Turkish-American member. He is the Sarah Graham Kenan Professor of Biochemistry, at the University of North Carolina at Chapel Hill. He is married to Gwen Boles Sancar, who graduated the same year and who is also a Professor of Biochemistry and Biophysics at the University of North Carolina at Chapel Hill. Together, they founded Carolina Türk Evi, a permanent Turkish Center in close proximity to the campus of UNC-CH, which provides graduate housing for four Turkish researchers at UNC-CH, short term guest services for Turkish visiting scholars, and a center for promoting Turkish-American interchange.