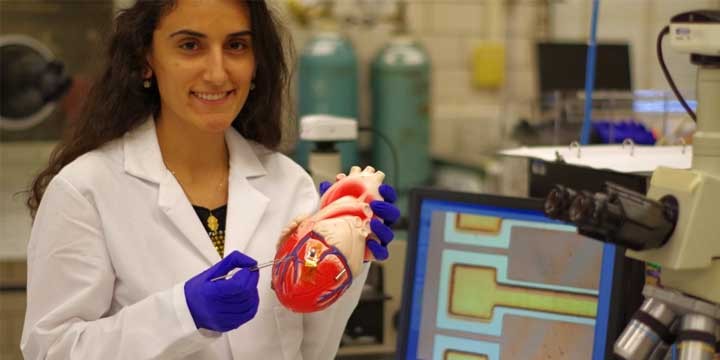 Canan Dagdeviren received the Fulbright Doctorate Grant in 2009 and received her Ph.D. degree in Material Science and Engineering at the University of Illinois at Urbana-Champaign. She is currently a Post-Doctoral Associate under the supervision of Prof. Robert Langer at MIT. Her passion is to make valuable contributions to neuroscience and to advance engineering devices.

Canan says she would like to bridge the gap between cutting-edge neuroscience research and active advance electronic devices by developing a multi-functional, minimally invasive probe capable of addressing the spatial and temporal aspects of treating neural disorders such as Parkinson’s diseases, anxiety and mood disorders.

She has published 18 research papers, is the inventor of one patent application, and holds over 30 prestigious awards. She has recently been selected as a Junior Fellow of Harvard by the Society of Fellows (SoF) at Harvard University, and is the first scientist from Turkey to be named as a Junior Fellow. In addition to this, she is on the “Forbes 30 under 30 in Science” list.

Her PZT MEH invention has enabled her to introduce a novel approach to energy harvesting from an intrinsic, continuous source of biological (cardiac) motion, with important clinical relevance to implantable cardiovascular devices. She has filed patents on this invention, and hopes to help commercialize this technology in the near future through entrepreneurial collaboration between the University of Illinois and University of Arizona.

Qualified Suppliers to the Medical Device Industry (Qmed) ranked her technology as number one out of the top five MedTech breakthroughs of this year, compared with Google’s glucose-reading contact lens which ranked second. Moreover, her work has received wide press coverage by prestigious information outlets such as the Smithsonian, Popular Mechanics, CBS News, LA Times, BBC News, New Scientist, and Medical Daily.