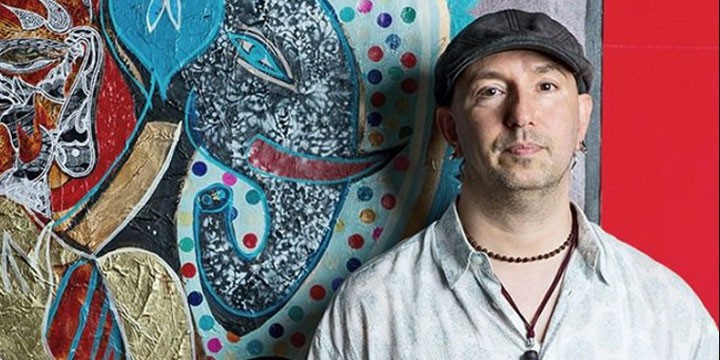 Mercan Dede (born Arkın Ilıcalı, 1966, Bursa, Turkey), also known as DJ Arkin Allen, is a Turkish composer, ney and bendir player, DJ and producer. He divides his time between Turkey, Europe and North America. He is a world music artist, playing a fusion of traditional acoustic Turkish and other oriental musics with electronic sounds.

His best known albums include Seyahatname, Su ( water), and Nar. He has worked in collaboration with Turkish and international musicians such as Susheela Raman, Dhafer Youssef, Sheema Mukherjee (Transglobal Underground) and Hugh Marsh.

The Mercan Dede ensemble was founded in 1997, by which time Arkın had been working as a musician for some years. Their first album was Sufi Dreams, released in 1998. This album got a boost when the music was used in a German television documentary on Sufi music.

In 2001 he released his third album, Seyahatname, which means "travelogue" in old Turkish, evoking the era of the great caravanserai crossing Anatolia on the silk road. The sound of the ney goes back to this period, and the music aspires to the spirit of the mystic Sufi poets of that time, such as Mevlana. Dede describes the sound of the ney as "a pure, universal spiritual sound" evoking deep feelings, deeper than we can comprehend in just our short time on earth. The ney "speaks the language of love, instantly comprehensible in the heart, compared to which all the mosques, churches, temples built to decorate (our spirituality) drift away". The album is Dede's personal effort to reflect on his own spiritual journey.

His 2002 album Nâr (which means "fire" in Turkish) continued in the same vein. In 2004, he released Su ("water"), which stayed at number one on European World Music Charts for two months. The album was recorded with an international line-up of musicians and has more vocals on it than the previous works. One track featuring folk singer Sabahat Akkiraz was particularly popular in Turkey. Dede made his U.S. debut at the first Globalfest that year, followed by a North American tour and the release of the album Fusion Monster under the name 'Arkin Allen', which has a slightly different twist on his familiar sound. He was commissioned by the Turkish Ministry of Culture as the music director of the Guldestan project to represent Turkish culture and arts all around the globe, working alongside choreographer Beyhan Murphy.

Mercan Dede and his Secret Tribe have given live performances at festivals including the Montreal Jazz Festival, WOMEX, the Festival de Trans Musicales and Banlieus Bleus, Arezzo, the Montreux Jazz Festival, the World Roots Festival and the Rhythm Sticks Festival and at more than 100 shows in Vienna, Geneva, Brussels, Cologne, Paris, Amsterdam and Istanbul.

His sound incorporates traditional instruments and ney from Turkey and other parts of the world, with horns, dance beats, ambient electronic music, and a Sufi spirituality. The name Mercan Dede itself evokes Sufism as "Dede" is the word for 'elder' in the Sufi traditions, although the name Mercan Dede was inspired from a character in a modern Turkish novel. Dede composes his own music, some of which is rhythmic, some new age.

He plays with groups of various sizes and fluctuating membership: the Mercan Dede Trio, the Mercan Dede Ensemble, and the Secret Tribe. The instrumentation used includes electronics and elements of classical Turkish music such as the ney (which he plays himself), percussion, violin, and zither. The groups often include Montreal-based percussionist Scott Russell, Canadian violinist Hugh Marsh, and Turkish clarinetist Hüsnü Şenlendirici. The shows often include men and women in Sufi costume doing Sufi whirling.

Dede works as a DJ under the name Arkın Allen, specialising in music related to that of his live groups, in this case house and techno dance music with an oriental flavour.

Dede has been criticised by Turkish music purists for not being steeped in the Sufi traditions and for not properly representing Sufism in his music and writings. Another criticism is that the whirling dancers he uses to accompany his shows do not accurately display the correct dervish routines. However, as more than a ney player, working just as often as a DJ as performing live in concert, with an audience consisting of clubbers, not Islamic scholars, Dede aims to synthesise several different traditions rather than recreate a historically pure music.