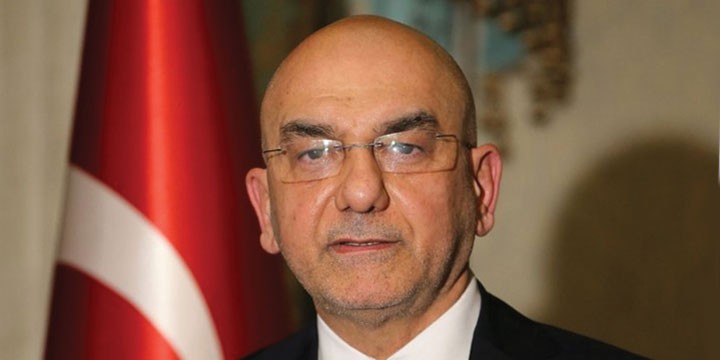 Ozan Ceyhun (born 10 October 1960, Adana, Turkey) is a German politician and diplomat of Turkish origin. He was a member of the Interior Committee in the European Parliament for SPD, coordinator of the SPD group for the Home Affairs Committee, alternate member of the Budget Committee and member of the Joint Parliamentary Delegation to the EU-Turkey. He most recently worked in the Hessian state representation in Brussels, after which he switched to the private sector. Ozan Ceyhun's father is the Turkish writer Ceyhun Demirtaş. Growing up in Istanbul, he graduated from the Bosporus Gymnasium in 1979. He then studied German philology at the Hacettepe University in Ankara until the 1980 military coup. In January 1981 he emigrated to Austria, in October 1982 to Germany, where he completed training as a state-recognized educator. [2] Among other things, he became known for his move to the SPD 2000 after he had been a member of the Greens from 1986 to 2000, where he worked as an expert on migration and asylum policy as an employee of the Bundestag group from Bündnis 90 from 1990 to 1992. From 1992 to 1998 he worked first as a speaker and later head of the department in the Hessian Ministry of Social Affairs, from 1993 to 2000 he was a member of the district council of the Groß-Gerau district. He has been deputy chairman of the Intercultural Council in Germany since 1997. From 1998 to 2000 he was a member of the European Parliament for the Greens, from 2000 to 2004 for the SPD. In 2000, Ozan Ceyhun published a publication on Islamismpublished in Europe under the title Politics in the Name of Allah. Furthermore, Ceyhun works as a consultant for the Turkish AKP party, u. a. for the former European Minister Egemen Bağış. ] For the ACP, he is standing in the parliamentary elections in Turkey in 2015 in a constituency of Izmir. He criticized the party leader of the GREENS, Cem Özdemir, on Turkish television and referred to the German President Joachim Gauck because of his controversial speech in Turkey as "layman" (toy), who with his dog-critical speech "cheap heroism “( Ucuz kahramanlık ) operate. On the occasion of the election for the 25th Grand National Assembly of Turkey on June 7, 2015, Ozan Ceyhun tweeted two nationalist tweets to his supporters, according to a report by former Bundestag member Memet Kiliç (Bündnis90 / Die Grünen): "With these opposition parties (...) you can you only become servants and slaves of Israel, the USA, and Germany ”, and:“ Today is the day when we, as a nation, will give the opposition parties who are in common with the Knights Templar an answer. Today is the day on which the AKP should be elected for an honorable and independent Turkey ”. In February 2020, Ceyhun was appointed Turkish ambassador to Austria.
.
.
.
Next >