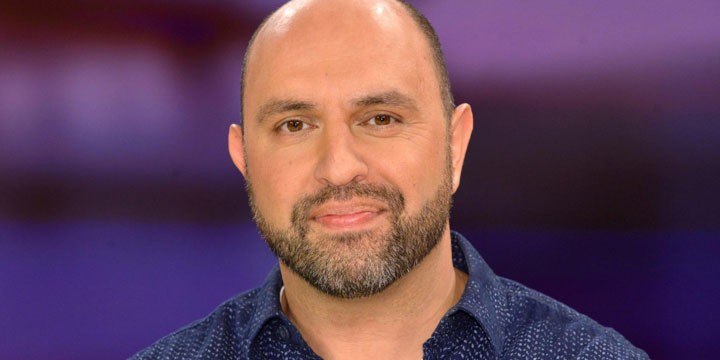 Serdar Somuncu [seɾdaɾ somund͡ʒu] (born June 3, 1968 in Istanbul, Turkey) is a German cabaret artist, writer, and director. For the election to the Bundestag in 2017 he joined as chancellor candidate of the party The PARTY. Occasionally, he appears as a musician, actor and voice actor.

Somuncu studied at the Conservatory of Music in Maastricht (1984 to 1986) and at the State University of Music in Wuppertal (1986 to 1992) music, acting and directing. He staged more than 100 plays, including for the Shakespeare Festival Neuss, the Forum in Wuppertal and the TiB in Frankfurt and also appeared as an actor, including at the theaters in Bochum, Bremen, Milan and Oberhausen.

In 2003 he was last seen as Bassa Selim at the opera in Münster in The Abduction from the Seraglio of Mozart; he played this role again in 2014, this time (May to July) at the Theater Dortmund. For April 2018, a production of George Tabori's Mein Kampf am Theater in Konstanz is announced. In addition, Somuncu took over roles in television series, such as in black attacks, the Lindenstraße, Dr. med. Psycho, as solicitor Samir Chada in the scene: Burned and as a taxi driver in Broken Comedy with Carolin Kebekus. As a speaker, he set several radio plays, including for the WDR.

He became known after 1996 with a scenic reading of selected passages from Hitler's book Mein Kampf. His years-long tour under the title estate of a mass murderer became a huge public success (1,428 appearances in front of more than 250,000 spectators). Somuncu strangely uncovered the inner contradictions of the book and commented on them. The taz honored him in a row as "Man of the Year 1996" from.

In 2000, Somuncu launched another reading, in which he presented excerpts from the sports palace speech of the Reich Propaganda Minister Joseph Goebbels on 18 February 1943. Among other things, he appeared in front of former inmates of the concentration camps in Buchenwald and Sachsenhausen.

Somuncu had problems with neo-Nazis during his work and therefore often read with bulletproof vest and under police protection. For example, on October 12, 2005 in Dippoldiswalde, Saxony, about 25 partially masked persons stormed the hall while citing Hitler's Mein Kampf and unrolled a banner on stage. Somuncu remained calm, walked off the stage, and later, with a standing ovation from the audience, tried to call the protesters for discussion; the disturbers left the hall with the police officers who had appeared in the meantime, the event could be continued.

Until December 2006 Somuncu was on the road with his program Hitler Kebab. Among other things, he read individual short stories from his book Separate Invoices and also took up daily political situations.

In his latest program, The Hassprediger reads Bild recited and commented Somuncu the current issue of Bild-Zeitung. In Austria the program was called Kronenzeitung, where he dealt with the Kronenzeitung.

In June 2008, Somuncu launched an internet show called Hatenight, in which he commented weekly on current topics. While the first 50 episodes were distributed via YouTube, in June 2009 the video portal closed Somuncus Channel with over 2000 subscribers without warning and deleted all videos. After that, Hatenight was on Sevenload. On 5 March 2010, it was announced that the program would have to be discontinued from a legal point of view, but after negotiations, it was allowed to continue to be produced, albeit shortened and defused.

At the end of January 2009, he began his tour The Hate-preacher - A demagogic blind test. In October 2010, he published his new book Carnival in millions.

As part of the late-night show neoParadise Somuncu had until the beginning of 2013, the regular section Records from the basement, in which he dealt with the curiosities of modern television entertainment.

On November 25, 2011, Somuncu released the Groove Attack label's first music album titled For this one comes to jail. The album was created in collaboration with the Cologne producer and musician André Fuchs, who can be heard in a song under his stage name Uncle Zwieback as Gastrapper. All instruments of the album's 18 songs were recorded by Somuncu.

As Duo Zwieback & T published Somuncu and Fuchs on September 19, 2013, the rap album We Both. Somuncu raps here next to Fuchs under the pseudonym T or shit T in reference to the American rapper Ice-T.

Since April 2014 Somuncu is occasionally seen as a commentator on the ZDF satire show heute-show. Somuncu is a member of the P.E.N. Center of German-Speaking Authors Abroad of the Writers' Association P.E.N. Since September 2016, Somuncus two-hour broadcast The Blue Hour on Radio One is broadcast on Sundays.

Since October 2015, Somuncus TV show So! Muncu! aired on n-tv. According to Somuncu, this is the deconstruction of a talk show, which sees itself more in the tradition of Christoph Schlingensief than that of Anne Will and Frank Plasberg.

Somuncu appeared as a leading candidate for the 2017 federal election for The PARTY. In the constituency of Berlin-Friedrichshain - Kreuzberg - Prenzlauer Berg Ost, he applied for a direct mandate and scored there 7.2% of Erststimmen.