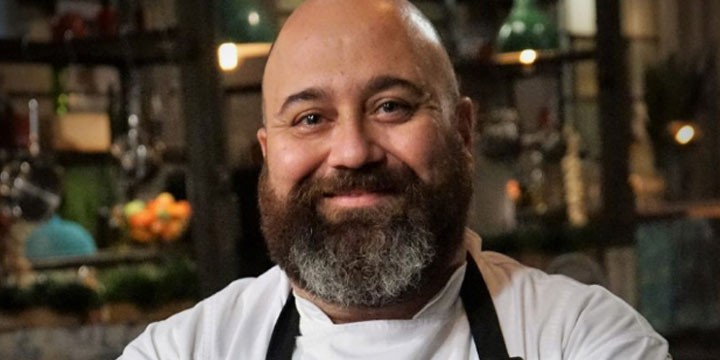 Somer Sivrioglu spent his formative years in a “long, unpaid, unappreciated, unofficial apprenticeship” in his mother’s restaurants in Istanbul and Bodrum, learning hands-on the skills of both a chef and restaurateur. In 1995, he moved to Australia to complete an MBA. High-profile corporate food and beverage roles followed, including management positions at Hilton Hotels, Fox Studios, the Urban Purveyor Group and Wagamama Group. Yet the call of the kitchen finally won out: as Somer puts it, after 10 years of “cooking the books”, it was finally time to start cooking the food.

In 2007, Somer opened his first restaurant, Efendy, in Sydney’s Balmain. Driven by passion, determination and sheer stubbornness, he set out to change Australia’s late-night-kebab perception of Turkish food, championing the complexity, seasonality and regionality of his homeland’s contemporary cuisine. An impressive collection of local and national restaurant industry awards speaks to the success of his campaign.

In 2015, Somer co-authored his first cookbook, Anatolia: Adventures in Turkish Cooking, with David Dale. It’s been printed in five countries in three languages and was named the best international cookbook of 2016 by the prestigious International Association of Culinary Professionals.

Somer opened his second restaurant, Anason, in Sydney’s Barangaroo harbourfront precinct in 2016. It’s based on the meyhanes of his beloved Istanbul – relaxed diners where locals drop by to eat meze, drink raki and socialise – and is now an award-winner in its own right

Somer has appeared on many radio and TV shows including Destination Flavour, Food Safari Fire, and, most recently, The Chefs’ Line on SBS, as well as starring in his own series, Somer’in Mutfagi (Somer’s Kitchen) for two seasons on Turkish cable television. He is in demand for local and international culinary events and has graced the stages at Taste of Sydney, the Culinary Institute of America and Gastromasa in Istanbul.

Somer returns to Turkey annually to keep up-to-date with contemporary Turkish food and the vibrant Istanbul dining scene. At Istanbul’s 2018 Gecce Restaurant Awards, both Anason and Efendy were ranked in the Best in the World category.