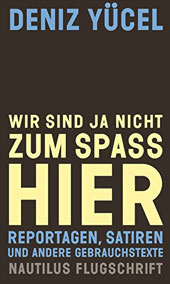 "This place," wrote Deniz Yücel from police custody in Istanbul in February 2017, "has no memory, all those I met here - Kurdish activists, estate agents, cadastre officials, arrested judges and police, gangsters - all told me: "You have to write that down, Deniz Abi." I said, "Logical, I'll do it, it's my job, we're not here for fun."

Since then, he has not been able to pursue his job as a journalist. Because he is in custody in Turkey - including nine months in a solitary cell. All efforts of his lawyers, his friends and colleagues in Germany as well as in Turkey, international journalist organizations and the Federal Government to obtain his release, have failed so far. Not even an indictment exists so far (within a year). But his voice cannot be locked away.

In tedious communication about his lawyers and curated by the journalist Doris Akrap, he has put together a selection of his texts from the past 13 years to a clever as well as entertaining and in every way varied book - reports, satires, polemics, comments, glosses and others "Use texts from the scuffle". There are also two pieces written for him in Silivri No. 9 High-Security Prison, as well as a contribution from his wife, television producer, and lyricist Dilek Mayaturk Yücel.

Readers of this book will express solidarity with the author and will contribute to a call for the immediate release of Deniz Yücel and all the journalists imprisoned in Turkey.