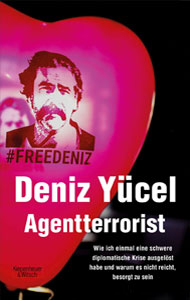 »Deniz Yücel will never be delivered to Germany», said Turkish President Recep Tayyip Erdogan in the spring of 2017, at least not while in office.

At that time, the German-Turkish journalist was in the maximum security prison Silivri No. 9 near Istanbul for two months. 10 months later he was finally released under adventurous circumstances.

The imprisonment of the Turkey correspondent of die Welt newspaper led to a huge solidarity movement in Germany and caused the greatest burden of German-Turkish relations since the Second World War. At the same time, the case in Germany ignites a debate about the relationship between German Turks and both countries. In his book, Deniz Yücel tells how he spent the year in solitary confinement, the harassment he was subjected to, and how he managed to outsmart the surveillance over and over again. He describes what the support of his wife Dilek Mayaturk and the "Free Deniz" campaign meant to him, and why the refrigerator is the safest hiding place in the prison cell.

It is a story of arbitrariness and blackmail, but also a story of solidarity, love and resistance. At the same time, Deniz Yücel traces the development that Turkey has undergone in recent years, from the hopeful start of the Gezi revolt, the Kurdish conflict, the refugee crisis and the coup attempt to the temporary end: Erdogan's consolidation of power with the spring 2018 elections.