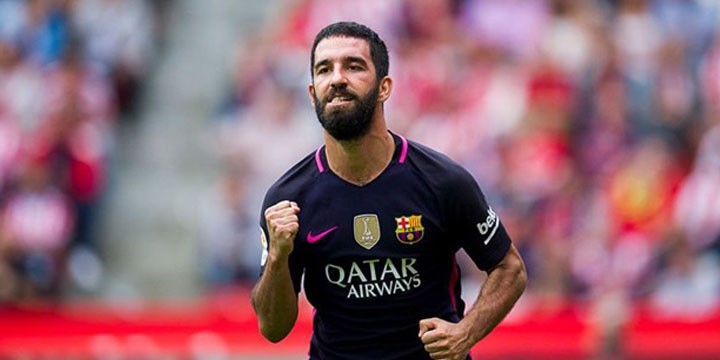 Arda Turan (born 30 January 1987) is a Turkish professional footballer who plays as an attacking midfielder for Spanish club FC Barcelona.

Turan is mostly known for his ball control, dribbling skills and vision. At age 21, prior to the 2009–10 season, he was named captain of Galatasaray. Turan is also the first Turkish footballer to win the La Liga title, achieving this in the 2013–14 season.

Following a successful UEFA Euro 2008 campaign, Turan was ranked eighth in a selection of the 100 Best Young Football Players in the World piece published by Spanish magazine Don Balón in July 2008.[3] Turan was ranked 38th in "The 100 Best Footballers in the World" by The Guardian in 2014, the only player on the list to be born in Turkey.[4] On 25 November 2014, Turan was nominated for the UEFA Team of the Year for 2014, among 40 other players.

Turan was a Turkish international regular, having made over 90 appearances for Turkey at senior level. He made his debut in the 1–0 friendly victory over Luxembourg on 16 August 2006, having worked his way through the youth national team at the under-19 and under-21 levels. He scored his first international goal on 25 May 2008 in a friendly against Uruguay.

Turan featured in nine of Turkey's 12 qualification matches for Euro 2008, and starred in the finals of the tournament itself. Turan scored two goals during Turkey's progression to the semi-finals. The first was a last-minute winner against co-hosts Switzerland in their second group stage match to eliminate them from the competition. His second came in the final group stage match against the Czech Republic, in which the winner would go through to the quarter-finals due to identical records. He scored Turkey's first goal in the second half, beating goalkeeper Petr Čech with a low shot, which led to Turkey coming from 2–0 down to win the match. He also successfully converted a spot-kick in the penalty shootout against Croatia in the quarter-finals, taking Turkey to the semi-finals, where they were eventually knocked out by losing finalists Germany.

Turan scored two goals during the qualification rounds of the 2010 FIFA World Cup, but ultimately Turkey failed to qualify from their group. After a qualifier in September 2008 between Armenia and Turkey – the two sides having historical political problems – both teams received a FIFA Fair Play Award for 2008.

Turan scored the Turkish national team's 600th international goal in a 2010 World Cup qualification game, against Estonia on 5 September 2009. He scored four goals for Turkey during the qualification rounds of the Euro 2012, two against Kazakhstan, one against Belgium, and one against Austria. Turkey, however, could not qualify for the final stages of Euro 2012 after being eliminated by Croatia in the play-offs.

In June 2017, Turan attacked verbally and tried to strangulate journalist Bilal Meşe in a plane trip back from a game against Macedonia. He then stated that he doesn't feel any remorse and that he will not be playing for Turkey anymore.[35][36]