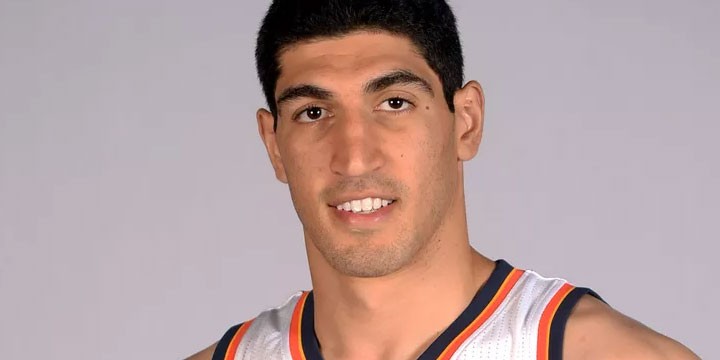 Enes Kanter (born May 20, 1992) is a Turkish professional basketball player for the Oklahoma City Thunder of the National Basketball Association (NBA). Standing at 6 ft 11 in (2.11 m), he plays at the center position.

Kanter was drafted third overall by the Utah Jazz in the 2011 NBA draft. Upon being drafted, he said "I'm so happy, I'm so excited. I know the Utah Jazz fans are crazy and I love them. I will bring the team toughness and post moves, rebounding, everything. I will try to do everything to make the playoffs." On December 9, 2011, he signed his rookie scale contract with the Jazz following the conclusion of the NBA lockout. In 2011–12, he became just the 10th Jazz rookie in franchise history to appear in every regular season game. He also recorded the most rebounds for a Jazz rookie on debut with 11 against the Los Angeles Lakers on December 27. On the season, he averaged 4.6 points and 4.2 rebounds in 66 games.

In 2012–13, Kanter improved his averages in every major statistical category, led the team in scoring three times and rebounding four times, and scored in double-figures 22 times. In 70 games (two starts), he averaged 7.2 points and 4.3 rebounds per game. On March 1, 2013, Kanter had the first 20-20 game of his career with career-highs of 23 points and 22 rebounds to lead the Jazz to a 98–68 victory over the Charlotte Bobcats. He later missed the final 10 games of the season due to a dislocated left shoulder.

On February 19, 2015, Kanter was traded to the Oklahoma City Thunder in a three-team deal that also involved the Detroit Pistons. Two days later, he made his debut for the Thunder, recording a double-double with 10 points and 13 rebounds in a 110–103 win over the Charlotte Hornets. On April 1, 2015, he scored a then career-high 30 points in a 135–131 loss to the Dallas Mavericks.

After the 2014–15 season, Kanter became a restricted free agent. On July 9, 2015, he received a four-year, $70 million offer sheet from the Portland Trail Blazers. However, three days later, the Thunder exercised their right of first refusal and matched the offer sheet extended to Kanter by the Trail Blazers. On March 14, 2016, he scored a then season-high 26 points in a 128–94 win over the Portland Trail Blazers. On April 6, he recorded a career-high 33 points and 20 rebounds in a 120–115 loss to the Portland Trail Blazers,[24]becoming the first player in Thunder history to score at least 30 points and grab 20 rebounds in a game. In Game 3 of the Thunder's first-round playoff series against the Dallas Mavericks, Kanter recorded a playoff career-high 21 points and a game-high eight rebounds in a 131–102 win, claiming a 2–1 series lead. In Game 4 of the series, Kanter helped the Thunder go up 3–1 with 28 points on 12-of-13 shooting, setting a playoff career high for the second straight game.

On November 28, 2016, Kanter recorded a season-high 27 points and 10 rebounds in a 112–103 win over the New York Knicks. On January 26, 2017, he sustained a fractured forearm after punching a chair on the Thunder's bench during their game against the Dallas Mavericks. He was subsequently ruled out for six to eight weeks. He returned to action on February 24, 2017 against the Los Angeles Lakers after missing nine games. He finished with four points on 2-for-12 shooting.