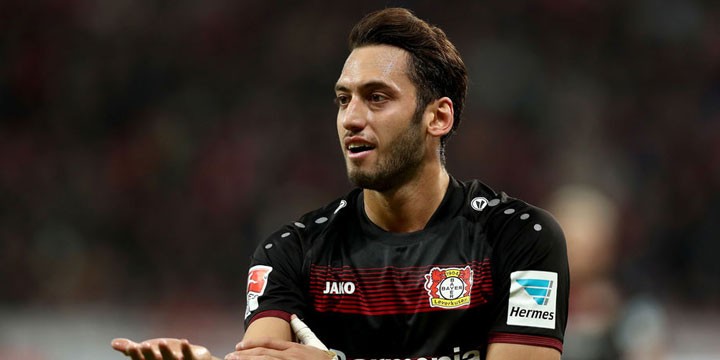 Hakan Çalhanoğlu (Turkish pronunciation: [ˈhaːkan ˈt͡ʃaɫhanoːɫu], born 8 February 1994) is a Turkish professional footballer who plays as an attacking midfielder for Milan and the Turkey national team. He is known for his ability to score from free kicks.

He began his career at Karlsruher SC in 2010 and moved to top-flight side Hamburger SV two years later, spending another season back at his first club on loan. His performance in his first Bundesliga season earned him a €14.5 million transfer to Leverkusen in 2014. Born in Germany, Çalhanoğlu opted to represent Turkey at international level, making his senior debut in 2013.

Born in Germany, Çalhanoğlu opted to play for Turkey, qualifying for them through his family's origins in Trabzon. He played for the country at youth international level, including the 2013 FIFA U-20 World Cup on home soil. Turkey reached the last 16 before elimination by France. In their second group game on 28 June, Çalhanoğlu scored Turkey's equaliser in a 2–1 win over Australia at the Hüseyin Avni Aker Stadium in his ancestral city.

Çalhanoğlu became the first Turk to score against England, in the 11th match between the two nations, a friendly at the City of Manchester Stadium on 22 May 2016. He equalised in the 2–1 defeat.

Çalhanoğlu has been likened to Mesut Özil, another German-born midfielder of Turkish ancestry. He expressed a desire to be the equivalent of Özil in the Turkish national team.

He is known for scoring from free kicks, and models his set-piece technique on those of Cristiano Ronaldo and especially Juninho Pernambucano.[1] In December 2013, Talksportcalled him "a playmaker destined for the top", praising his dedication and passing ability. Former England international Owen Hargreaves said on BT Sport in August 2015 that Çalhanoğlu's style of play would fit Liverpool or Tottenham Hotspur.