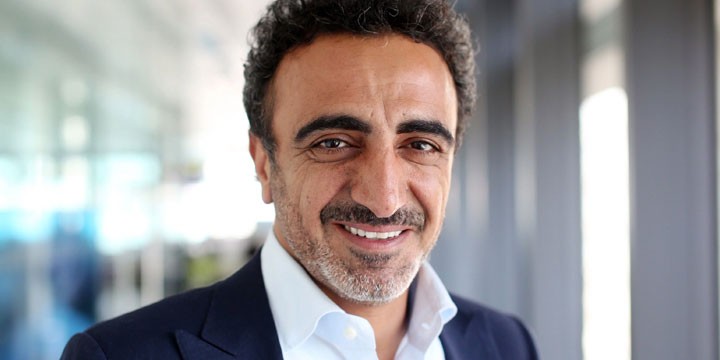 Hamdi Ulukaya (born October 26, 1972) is the owner, founder, Chairman, and CEO of Chobani, the #1-selling strained yogurt (Greek-style) brand in the United States. On April 26, 2016, Ulukaya announced to his employees that he would be giving them 10% of the shares in Chobani.

Originating from a dairy-farming family in a small village in Turkey, Ulukaya immigrated to the U.S. in 1994 to study English and took a few business courses as well. In an interview with CNN Money, Ulukaya explains that he was very serious about Kurdish rights and left Turkey due to the Turkish state's oppression of its Kurdish minority group. He started a modest feta-cheese factory in 2002 on the advice of his father.

His larger success came from taking a major risk: Ulukaya purchased a large, defunct yogurt factory in upstate New York in 2005, in a region that used to be the center of a dairy and cheese industry. With no prior experience in the yogurt business, he has created a yogurt empire, Chobani, with facilities in several states. It was valued at over $1 billion in annual sales in less than five years after launch, becoming the leading yogurt brand in the U.S. by 2011.

Ernst & Young named Ulukaya the World Entrepreneur of the Year in 2013. The success of his yogurt empire has made Ulukaya a billionaire and developed new employment in several regions. According to Forbes, his net worth as of 2016 is $1.92 billion.

Ulukaya has been noted both for his entrepreneurial skills and also his commitment to making affordable and nutritious foods using only natural ingredients.

In addition to receiving awards for entrepreneurship, in April 2014 he was named by President Barack Obama as an inaugural member of the Presidential Ambassadors for Global Entrepreneurship (PAGE) initiative – 11 selected business leaders who will encourage entrepreneurship in the U.S. and abroad. Also in 2014, the Culinary Institute of America honored him with its Leadership Award (Augie Award) in the Health and Wellness category.

Ulukaya was a member of the Upstate Regional Advisory Board of the Federal Reserve Bank of New York, and he is a Vice Chair of the corporate fund board of the Kennedy Center for the Performing Arts. He is on the board of the Pathfinder Village (Community for Down Syndrome) Foundation in Edmeston, New York and The American Turkish Society in New York City.