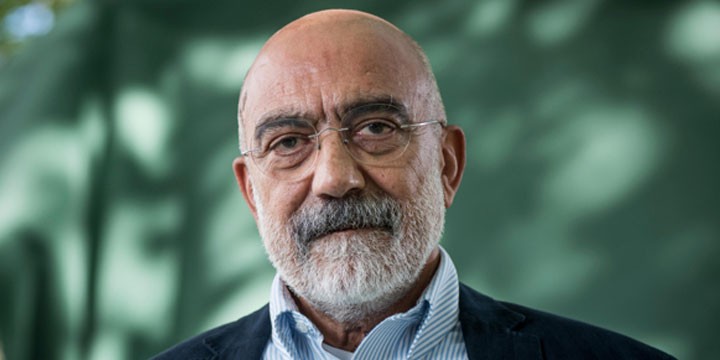 Ahmet Altan (1950) ranks among Turkey’s most-read novelists as well as its most influential political columnists. It is a role to which he was born. His father, Çetin Altan (1927-2015) was an important novelist and popular journalist as well as a politician. Ahmet’s younger brother Mehmet, a professor of economics, is also a household name in Turkey for his political commentaries. Ahmet Altan graduated from the School of Economics of the Istanbul University. In the decades that followed, he worked his way around newspapers from the night shift to the head of the foreign desk to managing editor, to nation-wide prominence.

It is as an op-ed writer that he commanded national attention. No taboo has proved too sacred to deflect his direct style and crystal-clear prose. In 1995, in his regular column in the newspaper Milliyet, he wrote a powerful defense of the rights of the Kurdish minority in Turkey, suggesting to his Turkish readers to assume for a moment that they lived in a country called “Kurdiye, instead of Turkiye, founded by a leader called Atakurd instead of Ataturk, and that they were banned from speaking, writing, and learning Turkish.” This was too much for the Turkish state at the time to swallow. First, Milliyet asked him to resign; then, Altan was tried by a State Security Court and sentenced to 20 months in prison. Since then he has been put on trial over 100 times for his political writing.

In 2007, Altan became founding editor-in-chief and lead columnist of the daily Taraf newspaper and remained in that position until resigning in December 2012. In his Taraf columns, he continued to defend minority rights and de-militarization of Turkish politics.

He has been a staunch supporter of Turkey’s European vocation and the democratic reforms this requires. When the Justice and Development Party (AKP) government, in its early years, introduced EU-supported reform packages and fought to undermine the military tutelage system in Turkey, Altan became an outspoken supporter of those policies despite his liberal secular values being at odds with the government’s Islamist outlook.

As Tayyip Erdoğan, the AKP leader, engaged in more nationalistic rhetoric and turned away from reforms to incrementally ever greater authoritarianism, Altan turned into a fierce critic of the man and his politics.

Altan is also known as one of the first Turkish intellectuals to publicly declare — what is even now denied by the Turkish state — that what the Ottoman Empire did to its Armenian population in the early 20th century amounted to genocide.

In the purge following the failed July 2016 attempted coup, Altan was arrested. The prosecutor alleged that his critical remarks on a television talk show was somehow a “subliminal message” to encourage the putschists. On 23 September, 2016 he was sent to prison pending trial. The trial began on 19 June 2017 and ended on 16 February 2018 with Ahmet Altan (along with his brother Mehmet and four others) being sentenced to life in prison without parole.

The sentencing is based on an article of the Turkish law, which calls for punishing the crime of attempting to overthrow the constitutional order of the country by using force and violence. The evidence against him consisted of three newspaper columns and his comments on TV—hardly the ‘’force and violence” which the verdict claimed. Paradoxically, he had been arguing for the government’s removal but only at the ballot box. The verdict was upheld by an appellate court in Istanbul on 2 October 2018. Altan’s lawyers are now appealing this ruling at Turkey’s Supreme Court of Appeals.

Ahmet Altan remains in Silivri prison, outside the city of Istanbul. He cannot receive visitors except for weekly monitored meetings with immediate family members, three close friends and his lawyers. All written correspondence, which was totally banned in the first 16 months of his detention, is now closely monitored and at times censored.

Throughout his journalistic career, Ahmet Altan continued to write novels and literary essays. His first novel Dört Mevsim Sonbahar (Four Seasons of Autumn) was published in 1982, when the author was 32 years old, and brought him the Akademi Bookstore Novel Prize. His second novel Sudaki İz (Trace on the Water) was condemned as obscene by an Istanbul court, which ordered the burning of the copies of the novel. Since then he has published eight more novels and seven collections of essays. Kılıç Yarası Gibi (Like a Sword Wound), a best seller and the first volume in Altan’s Ottoman Quartet — a turn of the century family saga in four novels all inspired by Altan’s own grandfather’s life — was awarded the prestigious Yunus Nadi Novel Prize in Turkey.

Altan’s novels have been translated into over a dozen languages. I Will Never See the World Again is his eighth collection of essays and his first book to come out in translation before appearing in its original Turkish. An earlier (2004) volume of essays, İçimizde Bir Yer (Somewhere Inside Us), sold a million copies in Turkey — a record for the genre that has still to be broken. In 2018, Altan wrote a book of essays in prison with the title “I Will Never See the World Again,” which was published in Spanish, German and Italian in Autumn 2018. An English edition will be published by Granta in Spring 2019. This book is special in Altan’s career not only because of the circumstances of its creation,  it’s the author’s first book ever that came out in translation before his native Turkish. At the moment, there are no plans to publish the book in Turkey.

In 2009, Altan was awarded the Prize for the Freedom and Future of the Media by the Media Foundation of the Sparkasse Leipzig. In 2011, he received the International Hrant Dink Award. The Turkish Publishers Association awarded its 2013 Freedom of Thought and Expression Prize to Ahmet Altan and the Istanbul Human Rights Association Freedom of Thought and Expression Prize was given to Altan in 2017, albeit in absentia while in prison.