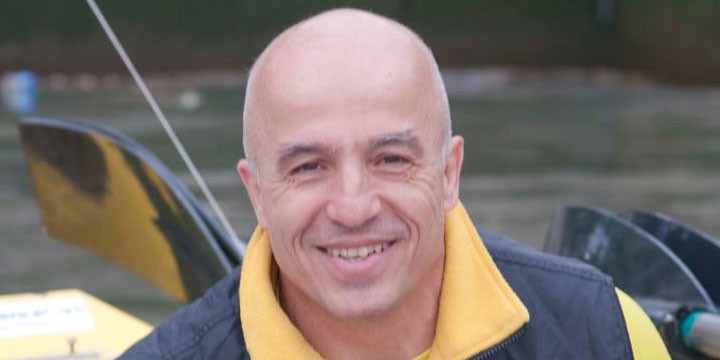 Seattle resident, Erden Eruc (pronounced 'Air-den Air-rooch') completed the first solo circumnavigation by human power in 5 years and 11 days. What started as a simple idea in 1997, become a quiet obsession. A tragic accident which claimed the life of Göran Kropp while rock climbing together in September of 2002, finally put him in motion. Life was too short.

Erden is the leading ocean rower in the world today. He is the recipient of the 2013 Citation of Merit from the prestigious Explorers Club, one of the 2013 Adventurers of the Year – “nine individuals changing the face of global adventure” by Outside Magazine, and one of the 50 Most Adventurous Men by Men’s Journal.

First to complete a solo circumnavigation of the world by human power
First to row the three oceans: Atlantic, Pacific and Indian
First to row across an ocean from southern hemisphere to northern
Greatest total distance rowed solo on the oceans - (over 33,000 miles)
Longest distance rowed across the Atlantic Ocean
Highest career total days for a solo ocean rower by 844 days
Most experienced ocean rower alive with an overall career total of 894 days (and counting)
Longest career distance rowed on oceans by nearly 29,000 nautical miles
Longest nonstop time at sea for a solo ocean rower by 312 days

Eruc was born in Nicosia, Cyprus in 1961 and raised in Turkey. He has been an avid outdoorsman from an early age. When he was 11, his father took him for a climbing trip to Mount Erciyes, an extinct strato volcano in south central Turkey and the highest mountain in central Anatolia with a summit at 3,916 m (12,848 ft). During his higher education years, Eruç studied mechanical engineering at Boğaziçi University in Istanbul where he earned both a Bachelor of Science degree and a Master of Science degree. In 1986, he moved to the United States where he continued his studies in engineering and business administration, earning a second Master of Science degree in Engineering Mechanics at Ohio State University and an MBA degree at George Mason University.

When his schooling was complete, Eruc worked in various technical consulting projects in the U.S. for nine years, advancing into project management. At the age of 41 he left the corporate office world, allowing him all the time he needed to pursue a dream of far-flung outdoor adventures. His new occupation was educating and inspiring others, especially children, through the pursuit of entirely human-powered travels around the world. He is now a sailor and certified seaman, holding a USCG endorsed Charter Boat Captain credential, also known as a National Operator of Uninspected Passenger Vessel (OUPV).

During his journey to Alaska to climb Mount McKinley, Eruç took some time out and married Nancy Board in June 2003. Board is an American businesswoman, an outdoor enthusiast and the acting Vice President of the Around-n-Over nonprofit organization. The couple met a few years earlier while both were consultants at a United States Postal Service project in Chicago. Though they are from different cultural backgrounds, Eruç being from Turkey and Board being from Missouri, they were married in a native Alaskan Haida-Tsimshian ceremony on a beach in Sadie Cove along the Kachemak Bay south of Homer, Alaska.