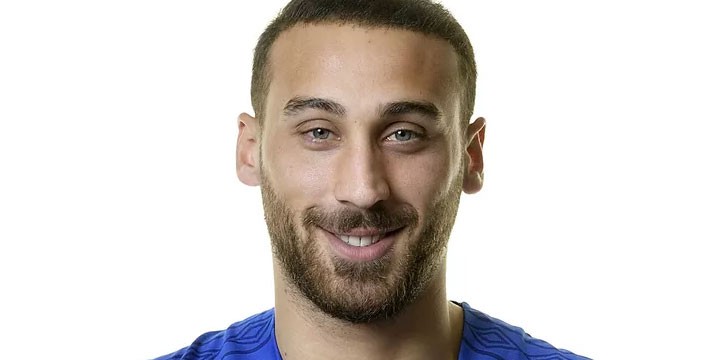 Cenk Tosun (born 7 June 1991) is a Turkish professional footballer who plays as a forward for Beşiktaş.

After making one Bundesliga appearance for Eintracht Frankfurt, he transferred to Gaziantepspor in January 2011, where he won the Spor Toto Cup in 2012. In 2014 he was signed by Beşiktaş and won two Süper Lig titles.

Tosun made his international debut for Turkey in 2013, and played at UEFA Euro 2016.

Born in Wetzlar in the German state of Hesse, Tosun began his career with Eintracht Frankfurt. He played mainly for the reserves in Regionalliga. His sole first team appearance was on 8 May 2010 in the final game of the Bundesligaseason, as a 75th-minute substitute for Martin Fenin in a 3–1 loss at VfL Wolfsburg.

On 29 January 2011, Tosun was transferred to Gaziantepspor for €400,000. He scored 10 goals in 14 league matches in his debut season half-season. After a less successful second season, he scored double figures in the following two campaigns, and helped the team win the Spor Toto Cup in 2012.

Beşiktaş signed Tosun on a five-year deal worth nearly €500,000 on 4 February 2014, effective from the 2014–15 season. He chose the number 23 shirt after basketball player Michael Jordan. In his first two campaigns at the Istanbul club he was mainly a substitute, behind Demba Ba and Mario Gómez in the pecking order. After they left, he was a regular in the 2016–17 season, scoring 24 times as his club won the league. He then turned down a move to Premier League club Crystal Palace.

In 2017–18, Tosun scored four goals in six games as Beşiktaş won a UEFA Champions League group containing RB Leipzig, Porto and Monaco, including both of a 2–1 win at the French champions on 17 October.

Tosun made his senior international debut for Turkey on 15 October 2013, replacing Selçuk İnan for the final 16 minutes of a 2–0 loss to the Netherlands in a World Cup qualifier at the Şükrü Saracoğlu Stadium in Istanbul; the result ended the Turks' hope of qualification. On 13 November 2015, he scored his first international goal, the winner in a 2–1 friendly triumph away to Qatar.

Tosun was part of the 23-man squad chosen by coach Fatih Terim for UEFA Euro 2016 in France. He started in the opening match, a 1–0 loss to Croatia, but was dropped for Burak Yılmaz for the following game against Spain, returning as an added-time substitute in the 2–0 win over the Czech Republic in Lens that was not enough to advance to the last 16.