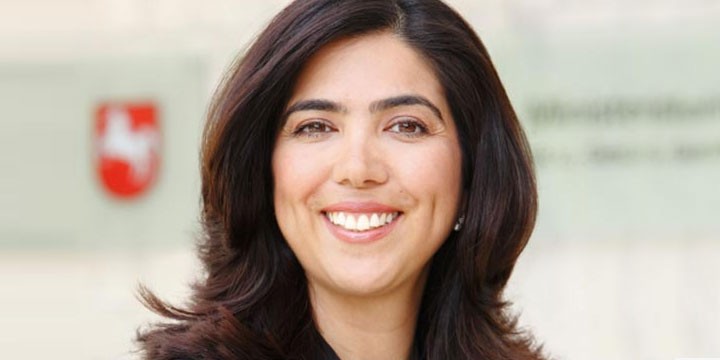 Aygül Özkan (born 27 August 1971 in Hamburg) is a German politician of the Christian Democratic Union. She has been a member of the CDU since 2004, and served as Minister of Social Affairs, Women, Families, Health and Integration in the state of Lower Saxony, in the Second Cabinet Wulff and the Cabinet McAllister between 2010 and 2013. In July 2014, she retired from active politics life resigning from her membership in the party. She was the first ever German politician of Turkish descent and a Muslim serving as minister.

Özkan's father immigrated from Ankara (Turkey) to Hamburg (West Germany) in the 1960s, where he first worked for Deutsche Bundespost and subsequently set up an independent business as a tailor in Hamburg.

Özkan became a German citizen when she was 18 years old. She went on to study law at the University of Hamburg, and became an attorney-at-law in 1998. She is married to a gynaecologist of Turkish origin, and has a son.

Özkan entered politics in the CDU in 2004, and was appointed Stat Minister of Social Affairs, Women, Family, Health, and integration in the state of Lower Saxony, serving in the cabinets of Christian Wulff and David McAllister from April 27, 2010 until February 19, 2013.

In a press release, Özkan announced her retirement from politics effective on July 22, 2014. She took a post as general manager of the DB Credit Service GmbH in Berlin, a subsidiary of Deutsche Bank, on August 1, 2014. She worked for the Deutsche Telekom and the Dutch TNT Express before she entered the politics.